Zimbardo’s and his colleagues infamous experiment in Stanford simulated prison is interesting how they chose the mock prison to get an insight about the behavior of prisoners and guards in real prison life. It is obvious that the situation has given power to the guards to be a sadistic but only because they were acting out roles that they thought were expected of them. They played a role whatever they want to in order to control the prisoners. Each prisoner’s right for toilet was a privilege, they were searched and stripped naked, and even deloused. This made prisoners to be emotional distressed and humiliated due. to the fact that they were so powerless. To me the experiment done was so unethical and inhuman. My question is, should Zimbardo and his colleagues had to go that far of an experiment of cruelty, dehumanizing, and ill-treatment to show the fact that  how the power of the situation influences human behavior? But I am happy for the participants that it didn’t last the whole 14 days.

As I was watching the video, it shows how  the prisoner torture and abuse at the Abu Ghraib prison in Iraq that came to public attention in late 2003 resembles with Stanford prison experiment . Zimbardo himself was struck by the similarity with his own experiment according to a source from Wikipedia. After his involvement and accessed all investigations and background reports, he was compelled  to write the  book The Lucifer Effect: Understanding How Good People Turn Evil.

The experiment on obedience to authority figures conducted by Yale University psychologist Stanley Milgram orders the teacher to give what believed are painful electric shocks to a learner and confederate. The teacher believes that for each wrong answer, the learner was receiving actual electric shocks. Even though the experiment also has an emotional  stress towards the learners, It did show how an ordinary person can become agent in a terrible destructive process.

From these two experiments, I learn that how situational power affects people. Too often we respond to the specific requests of the situation rather than referring to our own internal morals or beliefs. But one shouldn’t be swayed just because there is a  bad influence, people or systems.

“Well,” said Pooh, “what I like best,” and then he had to stop and think. Because although Eating Honey was a very good thing to do, there was a moment just before you began to eat it which was better than when you were, but he didn’t know what it was called.”
― A.A. Milne, Winnie-the-Pooh

The hover before the in breath,

milk ducts in an empty breast,

the stomach: a hallowed out bruise,

an arm contorted every way to ease a throbbing itch,

the coyote hamming to the camera in the air just off the cliff,

Is it the ohm?

Is it those last shivering atoms releasing the reverberation of the gong,

the hum of what was catching up to the trumpet of what will be,

the sway of the air’s almost embrace of the planet’s constant spin?

By far this is one of my favorite read written by one of the most talented actress and I can say she is also future best writer. The original is written in Spanish and I tried to translate it in English.

“My experience in this life can be as short or as long as you want to see. At the end of the day, I think it’s trying to decide what you’re filling your life day by day. I’ve decided to fill it full of learning, among other things. It hurts to grow but it’s worth it because I’ve learned.

Many United Staters are aware of the obesity epidemic that is sweeping our nation.  According to the NCHS Data Brief, between the years of 2011-2014, 36% of adults and 17% of children were obese.  Percentages that include those overweight are almost double of the above percentages.  And while common sense might dictate that we make healthier choices in eating, rates of obesity continue to climb.

In my waking life, I observe various reasons why this occurs.  First off, fast food and processed fare, whether Twinkies or hot dogs, are cheaper.  Our economy ails, and many people cannot afford to feed themselves healthy food.  And if someone is used to eating cheaper, unhealthy foods… certainly a sense of taste is developed, wherein that person enjoys that food.

Of course, obesity does not only affect the poor.  Plenty of people who can afford healthier food, choose not to eat it.  I suppose this…

This is a short book with a powerfully long crescendo. For those of you wondering about the time commitment, I basically read it in 48 hours (with Star Wars: The Force Awakens as a major “interruption”). What follows are all of my reflections and favorite passages (five each) after a first reading.

1. Cosmopolitanism – I’m mildly surprised that Coates chose *cosmopolitanism* as the deep structuring ideal for himself and his son. It’s a keyword in the text.

“Mericans’ is a short story by Sandra Cisneros. The authors choice of title “Mericans” tells that the characters are from both countries, Mexico and America. The story is most likely written from the view of a young girl and it is narrated by a young girl named  Micaela or Michelle who talks about a time in her life, when she is caught between two worlds Mexico and America. The author uses many details to visualize the culture of the characters and gives a mental picture where it took place. The use of Spanish words in the story such as, La Virgen de Guadalupe and la ofrenda give readers an idea that the characters have different cultures. The word “barbarian” that the grandmother uses to describe the birthplace of the children, also points out cultural differences. There were also two main settings in this story that the author used to contrast; the dark, dingy and smelly expresses the church, and  the bright, busy plaza where the boys were playing.

The grandchildren, “born in that barbaric country with its barbarian ways” (Roberts & Zweig, p.94), as the grandmother refers to the United States, have double names that reflect their double identities. On the American side, they are Michelle, Junior, and Keeks; on the other side, with their abuela (grandmother), they are called by their Mexican names, Micaela, Enrique, and Alfredito. The “awful grandmother” ,while she clings to her cultural heritage,  doesn’t want to accept the American culture of the children. She seems to holding fast to her old countries beliefs, and praying for those in her family who weren’t, just like her grandchildren who were “born in a ‘barbaric’ country”. The children, in the story, may look like Native Americans or Mexicans, but their main language is English. They use terms of American culture with the imagining characters, “Flash Gordon” and “Ming the Merciless” (Roberts & Zweig, p.94).

The children in the story embrace more of the American culture than a native culture with their games and also the language they prefer to speak. Michelle’s  brothers seem to be content playing and carrying on without the bother of what the awful grandmother is doing, and they have no references to their native culture. But Michelle tends to struggle understanding her grandmothers cultural heritage, and it seems to take her quite a bit of effort doing it. She and her brothers are stuck in the middle of the two worlds. Outside the church, waiting for their awful grandmother, they aren’t allowed to walk to the plaza, where there are balloons, punch balls, comic books, and other fun things. But they are also not allowed to come inside the church.

This story was quite interesting, showing the young kid’s struggle between the culture of a new country, trying to keep their beliefs and not forgetting where they come from. The grandmother’s character is a typical of those older generations who are trying in holding fast to their old countries beliefs. Though the story seems to occur around the era right after second world war took place, still at this current era such stories might exist where the younger generations stuck between a two cultural world. The characters in the stories are deeply rooted in the cultural contexts of their productions.  The story shows how it was like for little girl’s character growing up north of the US/Mexico border, surrounded by American influences while still being connected to her Mexican roots. The fact that the tourists think the children are Mexicans, but they speak in English illustrates the dual nature of Mexican/American children – caught between two cultures, searching for their identities. 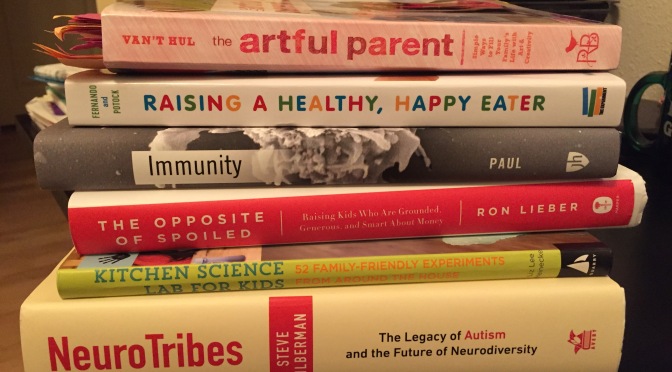 The Science of Mom

This time last year, I had a week-old baby, and my New Year’s resolutions were simple: Be present with my family, find gratitude in each day, and take care of myself. These goals were simple but not always easy. Still, it helped me to come back to these intentions for the year when I started to feel overwhelmed. I’m reaffirming those resolutions for the coming year, but I’m also feeling more ambitious and inspired about bringing more creativity, fun, and learning into each day with my kids.

I love books for inspiration, especially for projects with Cee. Maybe I’m old-fashioned, but I get too easily side-tracked or overwhelmed on Pinterest. I like to find great books and work my way through them. So for each of my resolutions, I’ve found a book or two as a jumping-off point for the year. (All of the Amazon links in this post are…

As much as atheism is touted as a fatalistic, deathly perspective, it is actually the most vibrant and alive. So many faiths preach the end of the world… but simply this is negative thinking! If we instead believe that we *ourselves* are responsible for our own survival, we will then take action, instead of waiting for divine intervention to end it all, Deus ex Machina style.

Things need to change regarding our mentality: We must stop valuing money. We must stop exploiting our planet’s natural resources as a source of income. We are completely unjustified to do this. What right do we have to deplete our stores of oil? Or our fresh water in aquifers? What about the atrocities we commit to create GMO products? And regarding factory farming of animals, different people have varying levels of what they think is exploitation. Some advocate for veganism, which unfortunately does not… 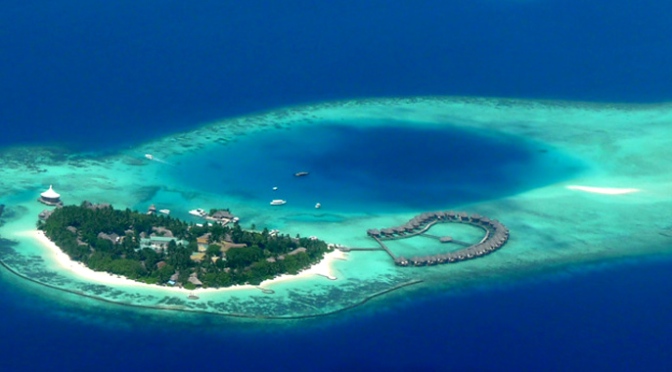 Once you go Maldives, you can’t go back.

A rich man’s playground, a poor man’s fantasy, she becomes the benchmark upon which you judge every subsequent beach holiday against, like an annoying boyfriend/girlfriend who keeps comparing to the ex. You forget what frugality is, you forget what contentment means, you forget to bring home your Havaianas from Maldives, if only to give yourself a perfectly justified reason to go back and retrieve it because let’s face it, your life is absolutely incomplete without those slippers.

Or maybe it’s a piece of your heart that you leave behind. Once you go Maldives, you are never the same again. And that’s how Maldives killed beach holidays for me. 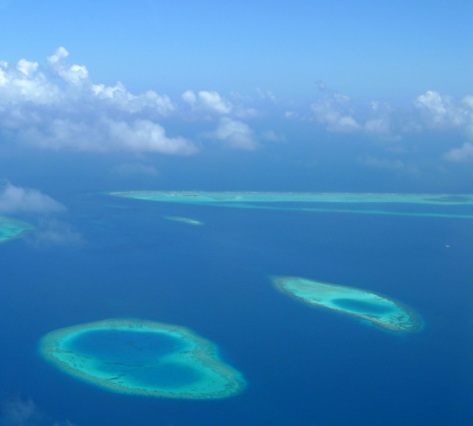 Fifty Shades of Blue: An aerial view from a seaplane, of ring-shaped coral reefs, islands or series of islets that surround a lagoon, collectively forming atolls which make up the Maldives.

When I first set afoot on…

Want to know how to keep your wardrobe stocked with the freshest items without making a huge dent in your bank account? It?s easy?shop our wallet-friendly ensemble each week! To make sure you’re set with the coolest (and most affordable!) buys, every Monday, we?re putting together an entire look for under $50. So scroll down to snag this week?s simple denim outfit, and make sure to come back every Monday to discover more bargain looks!